“Treehouse of Horror XXI” is the fourth episode of The Simpsons’ twenty-second season. It first aired on the Fox network in the United States on November 7, 2010. This is the 21st Treehouse of Horror episode, and, like the other “Treehouse of Horror” episodes, consisted of three self-contained segments: In “War and Pieces”, Bart and Milhouse discover a real-life board game that they must win to return home; in “Master and Cadaver”, Marge and Homer go on a honeymoon on a sailboat, and rescue a mysterious castaway named Roger; and in “Tweenlight”, Lisa falls in love with a vampire named Edmund. “Treehouse of Horror XXI” was written by Joel H. Cohen and directed by Bob Anderson. Daniel Radcliffe and Hugh Laurie both guest starred in the episode. The first segment references Jumanji, the second is a loose parody of Dead Calm and the third satirizes the Twilight novel and film series. The episode also contains references to The Office, A Clockwork Orange and Sesame Street. In its original airing on the Fox Network during the November sweeps period, the episode had a 3.7 Nielsen rating viewed in approximately 8.2 million homes. Critical opinion of the episode was mixed, with “Tweenlight” generally being regarded as the best of the three segments. 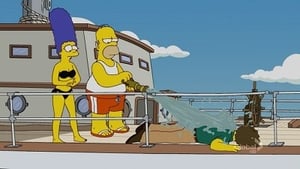