Three more scary tales are offered up in this 17th edition of the Treehouse of Horror.Married to the Blob: After eating mysterious green goo from a meteorite, Homer grows to massive proportions while he eats everything in sight.You Gotta Know When to Golem: Bart takes control of Golem of Jewish folklore, and forces the ancient statue to do his bidding by writing instructions on scrolls and placing them into the Golem’s mouth.The Day the Earth Looked Stupid: Taking place in 1938 Springfield, the townspeople react to Orson Welles’ famous War of the Worlds radio broadcast. However, they pay no attention when Kang and Kodos actually do invade the town. 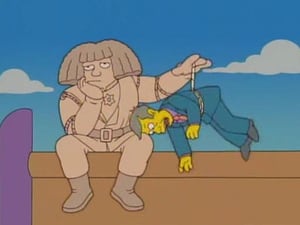