The Wettest Stories Ever Told

As the family waits for their food at “The Frying Dutchman,” they pass the time by telling stories. Lisa tells about the Mayflower’s journey to America, where Marge and her kids are Pilgrims and they are joined by a knave named Homer who joins their family to escape the authorities. Bart recounts the story of Mutiny on the Bounty featuring Skinner as Captain Bligh and Bart as Mr. Christian. Homer tells the tale of the maiden voyage of a cruise ship in the 1970s featuring of a ship that can’t flip over, which of course it does and the attempts of the survivors to get out of the ship alive. 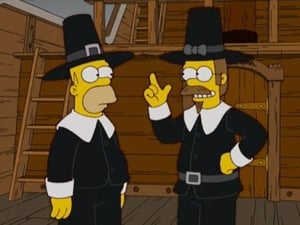