Homer spearheads the effort to get pro-football to bring a new franchise to Springfield. The football commissioner, on his way to officially award the franchise, stops at the Simpson house where Grandpa (mistaking him for a burglar) attacks him. Springfield loses out and Abe becomes the town’s pariah. After trying and failing assisted suicide, Abe decides to live his life without fear and when the town decides to reuse their football stadium as a bullfighting ring, he volunteers to be the toreador. Ever the activist, granddaughter Lisa protests his new profession. 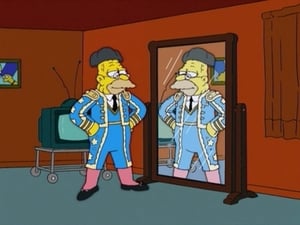